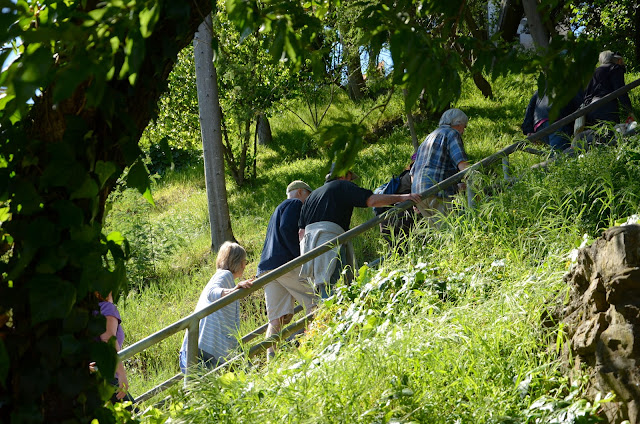 Special thanks to Neal Parish for not only leading Saturday’s walk but doing this write up about it afterwards.

This past Saturday, about 70 people and 4 dogs joined Oakland Urban Paths for a fairly strenuous walk through Upper Rockridge. The walk was led by Neal Parish, a local attorney, former chair of Oakland’s Landmarks Preservation Advisory Board, and frequent contributor to Oakland Wiki. This was the first time Neal has led an OUP walk, although he and his wife and son have participated in a number of OUP walks in the past few years. On Saturday’s walk, Neal’s son Ross helped ensure that everybody had a map of the route.

Along the walk, participants went on eleven separate paths and stairs — including two unpaved but city-owned pathways. According to the RunKeeper app on Neal’s phone, the group climbed a total of approximately 800 feet during the walk — living up to the warning on the route map that participants should “come ready for an active walk.” The good news is that the air was amazingly clear and the weather temperate, so the views were both outstanding and well worth the effort.

The group met in front of Chabot Elementary School. Before actually starting on the walk, Neal, who noted that he has a fascination with railroads, roads and buildings that no longer exist, showed off some of his favorite print resources for historical research, including Key System Streetcars by Vernon J. Sappers, and Sacramento Northern by Harre Demoro. Neal then shared some maps, pictures and other materials with the group, showing how the neighborhood near the school had changed between 1873 and 1945. The school itself was built in 1927, and was initially known as the Claremont Annex School. Neal noted that the road adjoining Chabot School had been variously known as First Avenue, 59th Street, Vernon Street and Pryal’s Lane, before finally named Chabot Road.

Neal also shared other pictures and maps at later locations during the walk. Many of the pictures were taken from one of Neal’s favorite websites, the East Bay Hills Project, which contains hundreds of historical pictures and allows visitors to take a “photographic journey following the right-of-way of the Sacramento Northern Railroad” from Rockridge to Walnut Creek. The OA&E / Sacramento Northern first began service through Oakland in 1913, and the last freight train ran on February 28, 1957. As participants of prior OUP walks through Shepherd Canyon and the Montclair Stairs had already learned, the tracks for the Sacramento Northern (originally the Oakland, Antioch & Eastern) used to go all the way from San Francisco to Chico, passing through Rockridge, Lake Temescal, Montclair and Shepherd Canyon along the way. Other sources of the information shared along the walk included the historic newspapers available through the California Digital Newspaper Collection (for free!) and NewspaperArchive.com (for a fee). 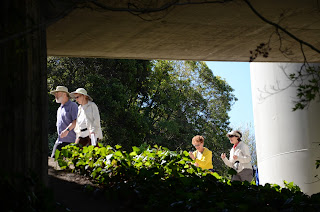 The first part of the walk was definitely the least attractive section, since the group first had to walk on Patton Street underneath the 24 freeway and the BART tracks, and then took a fairly unattractive (but useful!) pedestrian overpass that rises up to the level of the adjacent freeway and allows pedestrians to safely cross Broadway. Once the group finally took the stairway from Broadway up to Margarido Drive, the environment for the walk became much more attractive. At this point, Neal shared a pair of maps from the East Bay Hills Project, showing how this segment of Margarido become a dead end due to the construction of upper Broadway between Patton Street and the Caldecott Tunnel in 1935 and 1936.

The group then walked along Margarido Drive, Ocean View Drive, and down an unnamed set of stairs and N. Rockridge Blvd. to Rockridge Park. While at the park, Neal shared a 1909 ad for the Rockridge Park section of Rockridge, and a 1912 ad for Rockridge Terrace, and the group briefly discussed the impacts of the 1991 Oakland Hills Fire. The group then turned east on Rockridge Blvd. and made the long climb up Prospect Steps and West Lane back up to Ocean View Drive. After a short rest break, the group walked up Alpine Terrace — pausing to enjoy the view of the Bay over two lots that were still vacant due to the fire — down Locarno Path to Cross Road, and then up to the large intersection of Cross Road, Acacia Avenue, and Golden Gate Avenue, where a OFD ladder truck was parked in the intersection with its lights flashing. Apparently a contractor had struck a gas line during construction, and the firemen where there to make sure the situation was safely resolved. Neal told the group that he had seen one old newspaper article mentioning that the intersection used to feature a large cluster of trees in the center, although most had since been removed.

The group then walked along Golden Gate Avenue to the intersection with Romany Road. At this intersection, the group sidewalk stamps indicating this was known as the intersection of Hays and McAdam when the sidewalk was constructed in 1913 — as previously discussed on Gene’s Our Oakland blog. Neal then shared an Assessor’s maps and a series of pictures from the Key System book mentioned above, showing that the wide concrete section of Broadway Terrace from Clarewood Drive to Hermosa Avenue was originally the right-of-way for the Key System’s Rockridge Line – although the line only operated from 1907 to 1928. 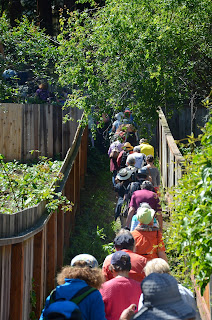 After continuing down Golden Gate Avenue and crossing Broadway Terrace, the group headed up Rotondo Path — which despite being nothing but dirt, grass and encroaching vegetation, is an official Oakland path (although the street sign visible in Google Maps was missing from the pole). The group then walked along Florence Avenue and Morpeth Street before climbing Morpeth Path — which is one of Neal’s favorite little paths in Rockridge, because of the very interesting landscaping and art in the yard of the house at the northwest corner where Morpeth Street becomes Morpeth Path. Many of the group members chatted with the homeowners, who were working in the backyard.

Where Morpeth Path met Proctor Avenue, the group again enjoyed the view over a lot that has been vacant since the 1991 fire, and Neal mentioned that Proctor Avenue is a prime example of a Rockridge street that includes an interesting mix of pre- and post-fire architecture. The group then walked down Proctor to Florence Avenue (again), then walked on a short section of Cochrane Avenue before turning on Sheridan Road. Here, Neal mentioned that older maps of the area show Sheridan as being a through road all the way to Broadway Terrace — although a 250 foot section of the road is missing – but a nearby property owner recently discovered that city records show that the road was never built. The group also learned about a project currently underway behind some of the houses on Sheridan near Broadway Terrace, where Caltrans was spending approximately $7 million to repair damage caused by a recent landslide and prevent further slides.

The group then walked down and up the first paved section of Sheridan, continuing past/next to the “No Trespassing” along a pathway within city-owned right-of-way, and up a set of stairs that were apparently built by the homeowners on the other end of the pathway to reach the other paved section of Sheridan. We then walked down to Broadway Terrace, where we carefully crossed the road at a crosswalk with limited sight distances, before walking down Broadway Terrace to Erba Path — where the group did the final climb of the day up to Contra Costa Road. 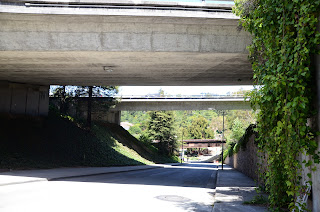 The group then walked along Contra Costa Road and Buena Vista Avenue along the top of the ridge, passing a lot where Temescal Regional Recreation Area adjoins Contra Costa Road, before going down an unnamed path back to Golden Gate Avenue, which we took down to Chabot Road. Along the way, the group stopped to enjoy an interesting view of the 24 freeway where Broadway passes over Golden Gate Avenue, and looked at a barely visible bridge where Golden Gate Avenue crosses Temescal Creek — a bridge that was described as a “rustic bridge” connecting Rockridge and Claremont in a 1913 pictorial. Finally, the group walked down Chabot Road back to the starting point. At Reata Place, Neal mentioned that the street was built on the former SN right-of-way, and a trestle used to carry the tracks across Chabot Road at this location.

Another great walk! The walk took a bit longer than anticipated – both due to the distance (4.4 miles) and the amount of information Neal wanted to share, but it was worth the effort. Many thanks to Neal for leading the walk and writing it up, and thanks to everyone who came out and those who donated after the walk. The donations will help OUP with our mission of spreading awareness of Oakland’s urban pathways and history (and maybe get that sound system fixed). We hope to see you on future OUP walks!

Here’s a map of our route.