There was a great turnout for the Oakland Urban Paths walk in Montclair last Saturday, which focused on the history of the Sacramento Northern Railway, the highway that wasn’t built, and the stairs of Thornhill.

Chris Kidd and I co-lead the walk, and were joined by 40 people and half a dozen dogs. We met near the park in Montclair Village, and started by viewing the two large concrete walls nearby on Mountain Boulevard. Many residents don’t realize those are left from the days when the Sacramento Northern Railway ran behind the village and a railroad bridge passed over Mountain Boulevard. 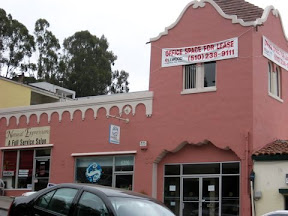 Then it was a short but steep climb up to the railroad trail. This wide, level trail follows the old Sacramento Northern Railway right of way, which makes it ideal for walking and biking—it’s part of my bike route home. My grandfather worked for the Sacramento Northern, so it has a personal connection for me as well. Along the trail there are various interpretive signs about local history installed by Eagle scout Daniel Levy. 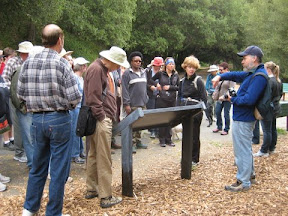 Originally, the Sacramento Northern was primarily for passengers, but later carried mostly freight. Conspiracy theorists will be pleased to note there really was a conspiracy by GM, Firestone, Standard Oil and other companies that helped lead to the demise of electric streetcars and interurban railways around the U.S. But the Sacramento Northern also faced increasing competition from shorter, less steep railroad routes. Passenger service on this part of the route ended in 1941, the final electric train on the SN was in 1965, and the last vestiges of the SN were folded into the Union Pacific in 1983. However, this history of the Sacramento Northern and even some of the rolling stock lives on at the Western Railway Museum in Suisun.

A little further up the trail, we learned about the freeway that was never built. CalTrans bought up land in Shepherd Canyon with the plan of building highway 77. It was to be an extension of Park Blvd., and would run up the canyon and connect highway 13 with Contra Costa county (much as highway 24 does just two miles north). Fortunately, community activists argued against the plan, and the area was preserved. In 1972, assembly member Ken Meade officially protected the area with AB561. After the downfall of the freeway plan, the Shepherd Canyon Corridor Plan was shaped by volunteers, and now guides the preservation of the canyon. 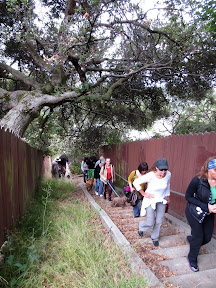 stairs up to Gaspar

We doubled back and took some stairs up the hill to Gaspar Drive. Like many of the stairs in Oakland, they’re unmarked, and it’s very easy to walk past them even if you’re looking for them. We traversed our way along Gaspar and Colton and Diaz Place, a short cul-de-sac, then went down some more unmarked stairs to Cabot and then back down to Mountain Blvd.

From there, Chris took the lead, and we headed up Thornhill Drive along the upper reaches of Temescal Creek. Geographically, we’d crossed over from the Sausal Creek watershed which goes through East Oakland, to the Temescal Creek watershed which goes through Oakland and meets the bay in Emeryville. Yet another way of looking at the question of where is East Oakland?

We took a short break at a coffee shop on Thornhill. After serving the sudden flood of customers, the owner came out to learn more about the OUP walk and to greet some of the two- and four-legged participants. 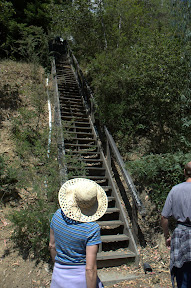 Then it was time for some serious stair climbing. While the stairs we’d climbed near the railroad trail were concrete, the stairs off Thornhill are mostly wood. In part because the hillside is steeper in places, and the wooden stairs can more easily match that.

Some of the stairs in this part of the walk I’d found while test-walking routes for Secret Stairs of the East Bay. We didn’t climb all the way to the top, but we pointed out an even steeper set of stairs that continued up the hill. While most of us then headed back down towards Thornhill, a few intrepid souls continued on up the stairs. That’s dedication!

All in all, another great walk. Thanks to everyone who turned out for it. Special thanks to Chris Kidd for co-leading the walk; Bob and Myra Redman for helping test the walk route; and Myra Redman and Katarina Stenstedt for taking pictures during the walk.

More reading:
The books mentioned during the walk are:

View our route on Google Maps. 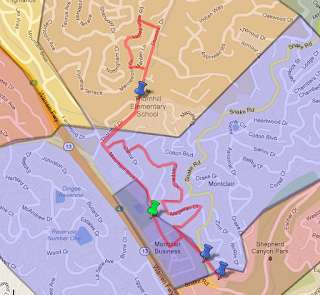