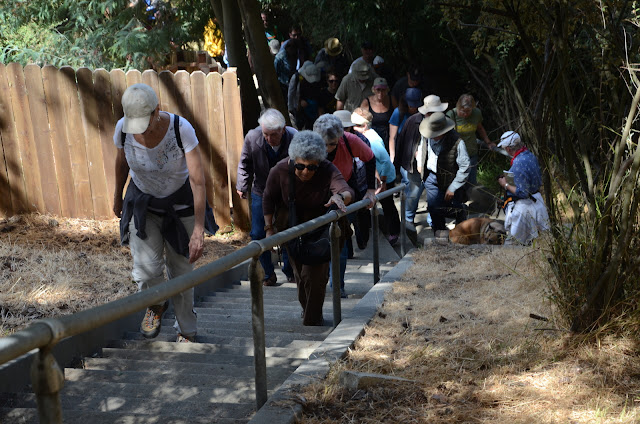 On Saturday, there was a nice turnout for the Oakland Urban Paths walk exploring Montclair and the history of the Sacramento Northern Railway. About 50 people and 3 dogs joined us for a hilly walk with several sets of stairs. Links to the websites I mentioned:

We started in Montclair Park near the duck pond, which dates back to the days of the J. H. Medau Dairy. A short distance away was our first stop, the 1927 storybook Montclair Firehouse. It was not designed by noted architect Julia Morgan, but Eldred E. Edwards of the Oakland Public Works Department. Because of seismic issues (the Hayward Fault is nearby), accessibility, and other problems, it has stood empty since 1989.

At the corner of Thornhill and Moraga, we talked about the Sacramento Northern Railway. It started as two railroads, the Oakland, Antioch and Eastern which ran from Oakland to Sacramento, and the Northern Electric Railway that ran from Sacramento to Chico. The railroad connected with the Key System and used their tracks beyond 40th and Shafter, and for a time, even crossed the Bay Bridge.

Around the block onto Fernwood, we came to the former location of the Fernwood estate. It was first the country estate of Legendary Local of Oakland, Jack Coffee Hays. The area was referred to as Hays Canyon or Jack Hays Canyon for many years. After he died, his wife sold the property to William Dingee, of Oakland Water Company fame. Dingee built an opulent 19-room Queen-Anne style mansion, and had additional landscaping done with gardens, terraces and waterfalls. He also added such features as a deer park and an elk paddock. Unfortunately the home (and lots of artwork inside it) were destroyed in an 1899 fire. The land was then sold to the Realty Syndicate. 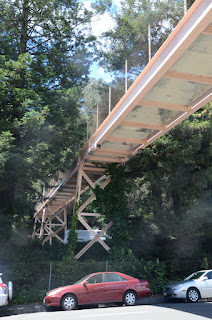 After a quick stop at the Montclair Women’s Club and the storybook Montclair Library (also not designed by Julia Morgan), we headed up our first set of stairs to Cabot Dr. Down Cabot and up Mountain Blvd. took us to another set of stairs up to Magellan Drive. The stairs continue up to Gaspar Drive near Snake Road, but we headed down to the Montclair Railroad Trail.

There we talked more about the Sacramento Northern, and about Highway 77, a highway that was planned but fortunately not built. It would have gone up Shepherd Canyon and through to Moraga; on the other side of Highway 13, it would have followed Park Blvd. and 14th Avenue over to I-880 (then Highway 17). People fought against the freeway plan, and with work by California assembly member Ken Meade, the plans were changed.

A walk through the parking garage(!) to see some murals, then past more murals on the drugstore and the yogurt store we came back to Moraga Avenue. Given the warm day, some people opted to head back to the start, but some intrepid souls joined me for one last hill and stairway. Across Highway 13 and then down Bruns Court took us to a pedestrian bridge which crosses both the highway and Moraga Avenue, to return us to our starting point.

Thanks to everyone who came out for the walk, thanks to our volunteer speaker carrier, and special thanks to Charlie for once again bringing up the rear to make sure we didn’t lose anyone. Hope to see you on the paths!