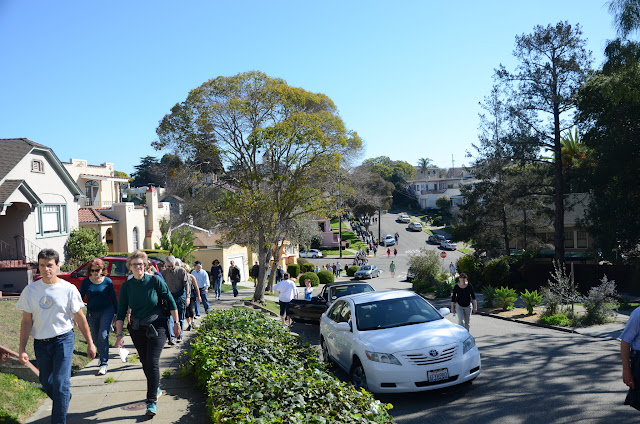 On Saturday we had an overwhelming turnout for the Oakland Urban Paths walk focused on the Cleveland Heights neighborhood and the nearby former home of “Borax” Smith. A record 132 people enjoyed the unseasonably warm weather to learn about this part of Oakland.

We started at the Cleveland Cascade, a water feature on the shores of Lake Merritt, built in 1923. It fell into disrepair, but a group of neighbors has cleaned it up and is raising money to restore it. Keeping our eyes out for gnomes, we wound our way around to the middle of the Haddon Hill neighborhood. It started as an exclusive development in 1912 by Wickham Havens, son of Frank C. Havens.

We had a longer stop at 552 Montclair Avenue. This c.1897 Victorian was built for Judge Edward C. Robinson and his family, including son Bestor Robinson who was law partners with Earl Warren and led the Sierra Club for many years. The house has lots its “witches hat” and been divided into apartments, and the tankhouse has lost its tank and windmill, but it’s still a spectacular property.

Our path took us past the Park Community Garden (the artwork I mentioned, “Her Resilience”, has been moved indoors for the rainy season) and a couple of murals, including one by Peter Lee. After walking past several beautiful apartment buildings that date back to the 1920s and 1930s, we stopped to talk about “Borax” Smith. Francis Marion Smith, known as Frank to his friends, and to his consternation, “Borax” Smith to the rest of the world, was a legendary local of Oakland. After making a fortune in borax (used as a cleanser), he invested in Oakland. He was the force behind the creation of the Key System street cars; the Realty Syndicate (where he partnered with Frank C. Havens) developed areas of Oakland and built the Claremont Hotel. His estate was called Arbor Villa; the row of tall palm trees on 9th Avenue marked one edge of the estate. While the grounds and the magnificent Oak Hall were being constructed, Frank and his wife Mary moved into the “old red house” (currently painted green) nearby. The Smiths entertained and hosted fundraising events in a grand style: “The most brilliant affair of the week of course was the reception which Mr. and Mrs. F. M. Smith gave on Wednesday evening at their charming home, Arbor Villa, in East Oakland, to which over 1300 guests from both sides of the bay were bidden.” (April 23, 1899 San Francisco Call).

Mary R. Smith was inspired by reading Benjamin Farjeon’s Blade O’ Grass about orphans in London, and the Smiths took in a number of young girls. Frank gave her some land nearby, and they set up a trust. The Mary Smith Home for Friendless Girls became home to numerous orphaned girls. The girls lived in cottages, each run by a house mother; the older girls helped take of the younger girls. Many of the cottages, including one designed by Julia Morgan, still stand.

Our final big stop was across from the Haddon Hill home of industrialist Henry J. Kaiser. We also looked at some former steps that used to go from the end of Haddon Rd. down to MacArthur Blvd. Those are closed off, and the statue that graced the plinth is long gone.

Thanks to everyone who came out for the walk! The regular second Saturday walk for March 12th hasn’t been set yet, but there will be a special walk on Saturday, March 19th, focused on women’s history. Check the website calendar for more info, and hope to see you on the paths!

More photos from the walk here.