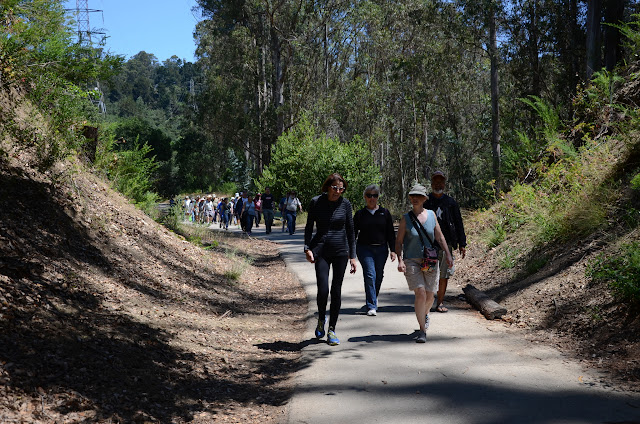 Note: Many of the links below are links to OaklandWiki.org, where you can find more information about the subjects. At the end of the article there are some additional links to other sites I mentioned, plus a link to a map of our route.

We started in Montclair Park near the duck pond. From there you can see some traces of railroad, including the bridge abutments on Mountain Blvd. We headed up Moraga Avenue to the nearby Montclair Firehouse. The lovely storybook structure hasn’t been used since the 1989 earthquake, because it’s seismically unsafe, and the Hayward fault is basically out its front door. There are some people who’d like to turn it into a firefighting museum, but without a lot of money that’s not going to happen soon. From there we headed to the corner of Moraga and Thornhill Road, and I showed people a picture of an SN train crossing the bridge that used to be there.

Then we walked over to Fernwood Drive, which is named for the historic estate that once filled the valley. It first belonged to Jack Coffee Hays, who gained fame as a Texas Ranger hunting down the Comanche people. After a stint as San Francisco sheriff, he moved to Oakland. He improved the county road that is now Moraga Road to access his estate; for many years the area was known as “Hays Canyon” or “Jack Hays Canyon”. After Hays’ death, his widow sold the beautiful Fernwood estate to William Dingee of the Oakland Water Company.

A bit of backtracking took us to the Montclair library, another local storybook gem, and the Montclair Women’s Club. We talked a bit about the controversy surrounding it. After decades as a women’s club, it’s been sold, and a group wants to put in a Montessori school. Nearby neighbors are concerned about the increased traffic, because there are two elementary schools within a half mile of the already busy intersection.

Then it was up our first flight of stairs to Cabot Drive. If you approached from the top, you might think you were trespassing, but the stairs are a public right of way. They’re just unmarked, so you have to know that they’re there. We walked down the hill to Mountain past one of the elementary schools, then climbed another flight of stairs up to Magellan Drive.

Finally, we dropped down to the Montclair Railroad Trail. This follows the actual right of way that the trains followed, and so has a very gentle grade and wide curves. We viewed one of the information signs about the SN, and another about Highway 77, the highway that fortunately was never built up Shepherd Canyon. We walked a bit further up, and I talked about the tunnel that the trains went through to get over to the Moraga side of the hills.

We backtracked, then went through Montclair Village and checked out some of the new murals. Including some in the first-ever-OUP parking garage traversal, as several of the latest murals are inside. We crossed Highway 13, climbed up to Bruns Court, then returned to our starting point via a pedestrian bridge back over Highway 13 (and Hayward fault!).

Thanks to everyone who came out for the walk and for your donations, and special thanks to those who carried the loudspeaker and clipboard for me at different points. Hope to see you on the paths again soon!

A Google map of our route.

Some more photos, both from the day of the walk and other

1 thought on “OUP walk: Montclair and the Sacramento Northern Railway”