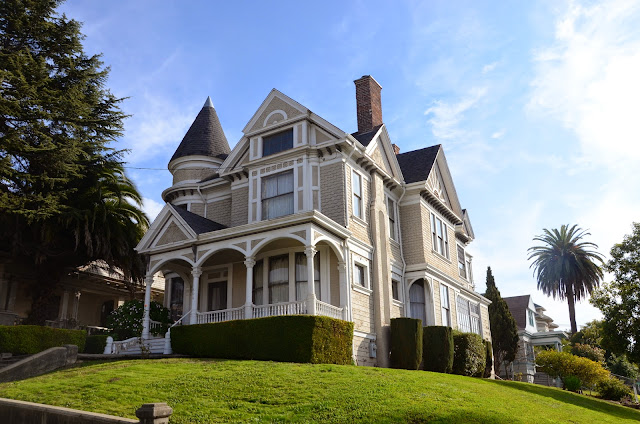 This post is a week late because I’ve been busy working on the Legendary Locals of Oakland book. Also note that I included some pictures in the slideshow at the end that are from when I did the test walk. It’s all things we saw on Saturday (except the cat and the squirrel), but that I didn’t have time to take during the walk.

“Oakland is nobody’s Brooklyn, but part of Oakland was once Brooklyn.”

We had an amazing turnout for last Saturday’s Oakland Urban Paths walk exploring the former town of Brooklyn. About 100 people and 8 dogs joined us as local historian Robert Perricone showed us around what was once a separate town east of Lake Merritt. Brooklyn was named for a ship that brought Mormon settlers to the area, not (directly) for the city in New York.

We started the walk in Clinton Square Park, which is another name from history. Moses Chase was the first American citizen to settle in what is now Oakland. He left his fiancee Mary Ellen Clinton to seek his fortune in California. After falling ill in the gold fields, Chase settled east of Lake Merritt and founded the town of Clinton, named for his fiancee. Sadly, she died before he returned to marry her. The town of Brooklyn was formed in 1856 by joining the settlements of Clinton and San Antonio.

We wound our way around various sites, some dating back to the town of Brooklyn or early Oakland, and some modern ones. Our final stop was one major building that’s no longer there, the Tubbs Hotel. It was a large, luxurious hotel, which covered the entire city block. Gertrude Stein’s family lived there for almost a year when they first moved to Oakland. As happens with many large, wooden structures, the Tubbs Hotel burned. There wasn’t enough water to fight the fire, so the fire became a spectacle with people coming to watch.

Stein left Oakland in 1891 after her parents died, and didn’t return until 1935. During that time, the Tubbs Hotel burned down, the family house torn down, Oakland’s population increased from 35,000 to nearly 300,000, and the bucolic neighborhood where the family had lived was now full of apartment buildings and nearby Highland Hospital. That’s what she meant by “there’s no there there”.

Thanks to everyone who came out for the walk, and many thanks to Robert for leading the walk. Below is a slideshow of photos, and below that are more links to the Oakland Wiki about some of the things we saw and talked about.

Pictures from our walk: