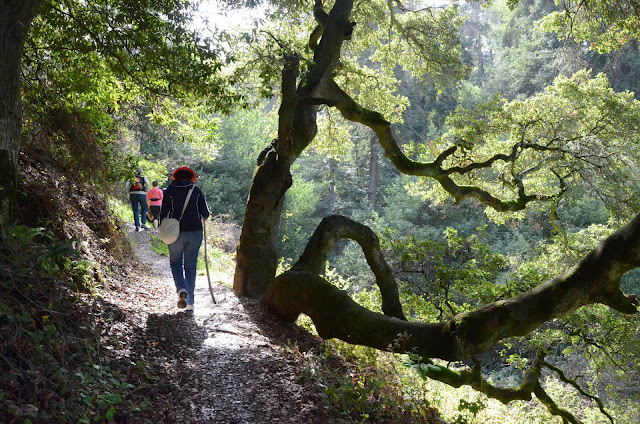 Saturday a surprisingly large group turned out for what was billed as “a strenuous and technically challenging walk.” Led by Stan Dodson of the Friends of Joaquin Miller Park (FOJMP), about 44 people and two dogs explored the park and looked at trail restoration work that’s been done, and some work that still needs to be done.

We met at the bottom of the Palos Colorado Trail, the lowest point in the park, and a section that many people don’t know about. After powering up with some tasty treats from La Farine Bakery (Stan is the manager of the Dimond branch), we walked up the trail that parallels Palos Seco Creek. It’s one of the main tributaries of Sausal Creek, and always has a least a little water. Since we’ve had a few good storms (like the one that postponed the walk from last month) there was a nice flow of water and things were a vibrant green. 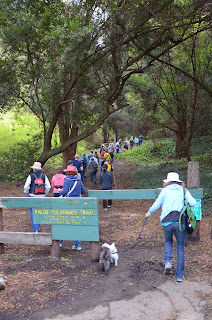 The trail took us to the site of the former Sinawik Cabin. It was built in 1949 for the Girl Scouts, but was in disrepair since the 1980s, before burning to the ground on July 4, 2013. From there we headed further up hill, along several trails that have been rerouted by FOJMP and other groups like Volunteers for Outdoor California. Still climbing, we went up the Cinderella Trail, where Stan showed us a unique area that showcases all the major ecosystems contained within Joaquin Miller Park.

We took an alternate route hoping to find some open restrooms, but alas, they were closed. The detour wasn’t all bad, though, as it took us along one of the most beautiful and most-used trails in the park, the Big Trees Trail. After a bathroom break at another set of bathrooms and a bit of rest, we looped back past the Sinawik Cabin, then out of the park onto Castle Drive. A couple of hard-to-find urban paths and side streets took us to Mountain Boulevard, past the tunnel under highway 13 which connects to Dimond canyon, and back to our starting point.

Another great walk! Thanks to Stan for leading the walk, everyone who came out, and to everyone who donated after the walk. The donations were given to the Friends of Joaquin Miller Park to help continue the great work they’ve been doing on improving and maintaining the park.

A map of our route (which was a bit different than what was originally planned).

Lots of pictures from the walk: