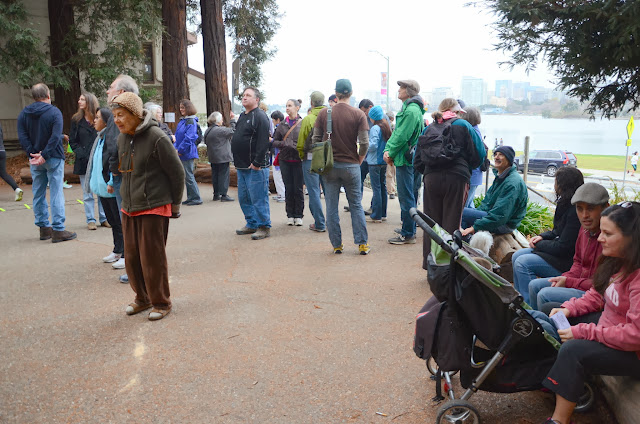 Saturday about 65-70 people and 3 dogs joined Oakland Urban Paths for a walk around Cleveland Heights and the former “Borax” Smith estate near Park Blvd. It was a good crowd, considering the overcast skies and the threat hope of rain.

We started the walk at the bottom of the Cleveland Cascade, what was once a beautiful fountain. A neighborhood group that cleaned up the stairs and fountain in 2004 has added new railings and lights, and is working to raise funds to restore the fountain, too. Even with no water, the stairs are a popular place for Oaklanders to exercise.

At the top of the stairs, we saw where the right of way for Cleveland Street continues. We walked around the block (keeping an eye out for gnomes, sidewalk stamps, and other interesting things) and met up with Barbara Newcombe at the end of Cleveland Street. She was one of the original neighbors that re-discovered and cleaned up the cascade. One of her current projects is working with other neighbors to make a path through the right of way, so people can go directly from Cleveland Street to the top of the cascade and then to Lake Merritt, instead of going around the block like we did. 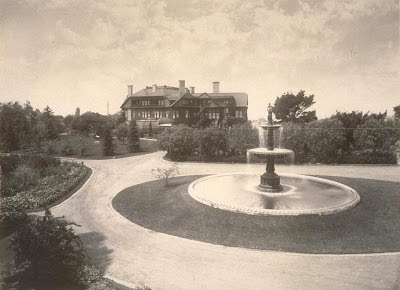 We walked up and down the hills, past beautiful houses, to Park Blvd. As we walked, people spotted the distinctive row of palm trees across the way. These trees mark the edge of Arbor Villa, the once palatial estate of “Borax” Smith. The trees are one of the last signs of the estate that featured numerous gardens, a deer paddock, a 5-story observation tower, a cattery, and the amazing Oak Hall. Oak Hall had at least 42 rooms including 15 bedrooms, a ballroom, a bowling alley, an attached conservatory, a huge pipe organ, and more.

In Oakland, “Borax” Smith is best remembered for creating the Key System and the Realty Syndicate, which created destinations like the Claremont Hotel and streetcar lines to get people out to see and purchase their real estate. Unfortunately the Key System is gone, just as Arbor Villa is.

Something that still survives in part are the cottages of the Mary Smith Home for Friendless Girls. Smith’s first wife, Mary “Mollie” Smith started an orphanage for girls. On land north of Park Blvd., the trust built a number of cottages. Each was lead by a house mother, and had between 8 and 12 girls of varying ages. A number of the cottages are still there, including Evelyn Cottage, which was designed by noted architect Julia Morgan. Also still standing is “The Lodge”, which served as the office for the orphanage. The house is privately owned, but still contains the built-in desk and other features left from its days as an office.

We meandered back towards the Cleveland Cascade, through the Haddon Hill neighborhood. There we saw a stairway that has been fenced in and overgrown, and a nearby home once owned by Henry J. Kaiser. Nearby, a beautiful flight of stairs took us to the street behind Our Lady of Lourdes church, and then a short walk took us back to our starting point.

Thanks to everyone and everywoof that came out for the walk. Hope to see you on the next OUP walk, on Saturday, February 8th!

Special thanks to Robert Perricone for the use of some of his photos from the walk.