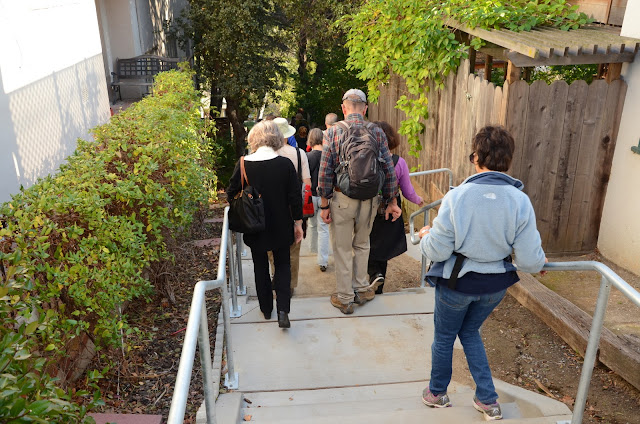 Saturday several dozen people and 1 dog joined us for the fourth annual “Walk and Shop” walk with Oakland Urban Paths. We took the same basic route as previous years, except that we reversed the path. Even if you’re not into holiday shopping, it’s a great walk.

As before, we started at Mandana Plaza along Lakeshore Avenue. We headed behind the Grand Lake Theatre, across Grand Avenue and over I-580 and up some stairs into Adams Point. From there we walked on more stairs down past Harrison and Oakland Avenues to Glen Echo Creek.

We paralleled the creek under I-580 to MacArthur Blvd., where we then headed up to Piedmont Avenue. People were given the option of starting their shopping explorations, or a brief jaunt back over to Glen Echo Creek to see where it is above ground again. Most people opted for the latter, then returned to Piedmont Avenue. After a brief pause for shopping, food, or whatever people wanted to do, the group re-gathered at the Key Route Plaza for our return walk.

We crossed back over Harrison and Oakland Avenue, and into the Morcom Rose Garden. Then we walked up Jean Street (and that’s a long way up) so that we could walk down some newly paved stairs on Bonham Way then cross Grand Avenue. We stopped for a bit outside the office of Ruth Stroup. She owns the building adjacent to the bottom of the Davidson stairs, and had it fixed up, and stepped out to say hello.

Then we had a special OUP treat. One of the Walk Oakland Bike Oakland (OUP’s parent organization) board members invited us to his home nearby. We climbed part of the Davidson steps, walked a few blocks, and were welcomed into a sunny back yard and a table spread with tasty treats for us. After lounging about for a while, we returned to our starting point by climbing the rest of the Davidson stairs. They’ve been recently repaired by the city of Oakland, so after many years of hazardous stepping, they’re in great shape.

Thanks to Wade and Lisa for hosting us, and thanks to everyone who came out for the walk. Hope to see you on the next walk, Saturday, January 11th!