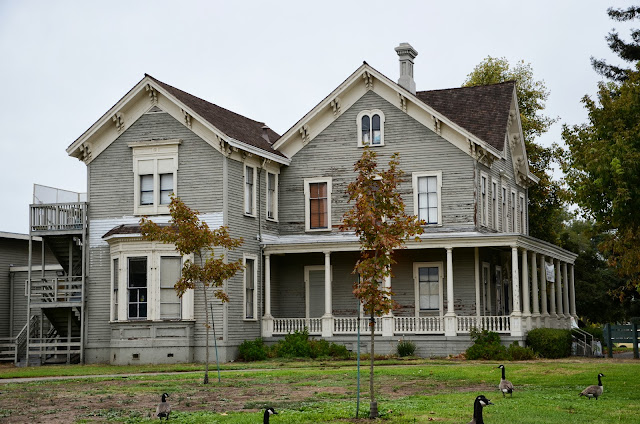 These days it’s easy to think of Old Oakland and West Oakland as separate areas of Oakland because of the freeways, but in the past they were connected into one continuous neighborhood. Saturday about 35 people and two dogs joined Oakland Urban Paths for a walk exploring these areas.

We started the walk in front of La Borinqueña Mex-icatessen, where Tina “Tamale” Ramos told us about some of the changes in the area. Tina is a 3rd generation Oaklander and 3rd generation running a business in Oakland, so she and her family have seen a lot of the changes over the years. Her mom, “Mama Tamale”, is retired from running the business, but still comes in on Saturdays and for special events, to give tamale advice and talk about the old days.

In front of Tina’s tamale shop is a marker for the 10,000 Steps Project. It’s an art project highlighting the historic parks of downtown Oakland. We passed by a number of other markers on the walk, including ones at Lafayette Square Park, the Pardee Home, and Jefferson Square Park. There are 37 markers total, and more than half of them have an associated audio segment, including interview clips with Tina and her mother.

We headed up to Lafayette Square Park, which was the original location of the Chabot Observatory. It was a gift of Anthony Chabot, who is probably best known as the founder of the water company that eventually became EBMUD. The observatory was in downtown Oakland from 1883 until 1915, when increasing light pollution from the growing city required a move to the hills.

A short walk from the park took us to the Pardee Home Museum. It was the home of Enoch Pardee, who was mayor of Oakland from 1876–1878, and later the home of his son, George Pardee, who was mayor of Oakland and later governor of California. Besides preserving the historic house, it also serves as a museum. George and Helen Pardee’s daughters, Madeline and Helen, lived in the house their entire lives, changing very little over the years, so it is well-preserved. George Pardee was also involved in the creation of EBMUD and somewhat indirectly the creation of the East Bay Regional Park District.

Across the street is Preservation Park. There are 16 historic buildings there, but 11 were moved from elsewhere to save them from the wrecking ball when the freeways were built. The park is now run by a private company and houses offices for different non-profits as well as a small restaurant. Unfortunately there was an event so the park was closed, preventing us from getting a closer look at the homes and at the Latham-Ducel fountain in the middle of the park.

Around the corner from Preservation Park is the First Unitarian Church. The lovely brick structure was damaged in the 1906 earthquake and again in the 1989 Loma Prieta earthquake. The church was started when Presbyterian pastor Laurentine Hamilton was charged with heresy for his teachings. He left the Presbyterian church, and much of the congregation went with him.

Our next stop was further away, on the other side of I-980. Blocks and blocks of homes and businesses were destroyed for the construction of the freeway, but some of the homes were saved and moved to Preservation Park. A block or so south of our route was the original location of Oakland High School, but it was gone long before the freeways came through.

We eventually came to de Fremery Park. The park is a hub of West Oakland, with a recreation center, picnic tables, tennis courts, and a skateboard park. It hosts a variety of events, including the annual Black Cowboy Parade, which has been around almost 40 years. Even more years ago than that, the Black Panther Party held rallies and food giveaways at the park. But originally it was the grounds of the de Fremery family house known as “The Grove”. James and Virginie de Fremery were a wealthy couple and had numerous descendants in Oakland. But what is less well-known is that Viginie was the child of a Dutch merchant and a former slave he purchased then later married.

We discussed gentrification and the broader sweep of West Oakland’s history. Although there were exceptions like William Shorey, the largest number of African Americans came to Oakland during WWI and WWII. Some had found work as Pullman Porters, and Oakland was the end of the line for the transcontinental railroad. Many settled in West Oakland, not necessarily because they wanted to, but housing covenants as well as unspoken rules made it so West Oakland was the only place they could live.

From there, we walked past the former site of the Miller home. Keeping with our earlier utilities theme, Albert Miller and his son C.O.G. Miller were involved in the creation of Pacific Gas & Electric. There were questions about the food mill across the street. Although there are no signs, it’s still an active business. It began back in 1915 as the Pacific Coast Shredded Wheat Company; now it produces organic rice flour, crisp rice, and corn flakes, most of which goes to Japan.

To the west we came to the Cypress Freeway Memorial Park. More recent arrivals to Oakland may not know that where Mandela Parkway is now was originally the location of the Cypress Structure which collapsed in the 1989 earthquake. The park is a memorial to those who died, and features a sculpture recalling the twisted wreckage of the freeway, the dust rising from the debris, and the ladders that people in the neighborhood brought to help reach the victims. There is also a mural called “15 seconds” which is a trace of the seismograph of the main temblor of the earthquake. Unfortunately part of it has been damaged and painted over.

We headed down Mandela to 7th Street. We didn’t have time to walk there, but I pointed out where Esther’s Orbit Room and other music clubs in West Oakland made up what was once known as the “Harlem of the West“. Noted jazz and blues musicians from all the U.S. came to Oakland to perform, and some even got their start here.

We walked past The Crucible and talked about its art programs, as well as the Oakland Running Festival that passes through the area. Then it was down to Linden Street Brewery. The brewery itself is in a building that was originally cable manufacturing plant. But we were there to see the former location of the nearby Moore Dry Dock Company, which built ships including ferryboats for the Key System, as well as structural steel for projects like The Paramount Theatre, the High Street Bridge, and caissons for the Bay Bridge.

Our return journey took us past Urban Legend Cellars, one of Oakland’s wineries. Turns out one of the people on the walk works for a winery in Alameda [ sorry, don’t remember name ]. Both of them are members of the East Bay Vinter’s Alliance, which holds a number of fun wine events in Oakland and Alameda. Then it was through Jefferson Square Park and back to La Borinqueña. A number of us stayed for lunch and for a sneak peek of the new garden space behind the restaurant. It was featured the next day at the Viva Tamales! fundraising event.

Thanks to Tina for her hospitality, special thanks to Robert Perricone and Fran Estrada for the photos, and thanks to everyone and everywoof that came out for the walk.

October’s walk will be on the second Saturday, October 12th, and will feature the new Bay Bridge Trail and pathway.

Lots more photos from the walk: