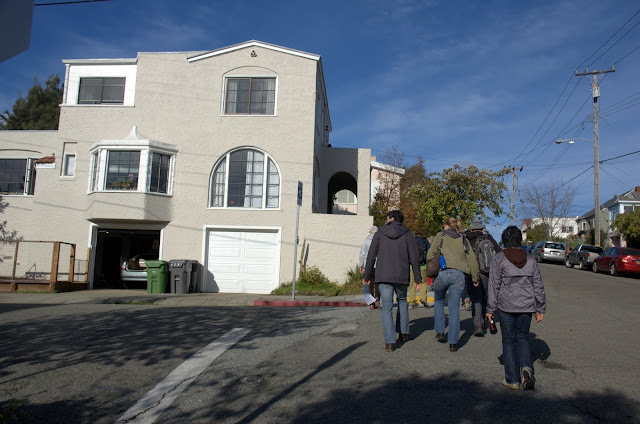 Saturday there was a small but enthusiastic group for the third annual Oakland Urban Paths ‘Walk and Shop’. We started on Lakeshore in Mandana Plaza and had beautiful weather for our walk.

We walked up the hill to look out over Lake Merritt past the Grand Lake Theater sign, and talked a bit about signs and urban paths. Some paths have street-like signs, some have other signs, but many have no signage at all. Since our walk was going to take us from Oakland into Piedmont and back, I told people about how to tell what city you’re in based on the style of street signs. 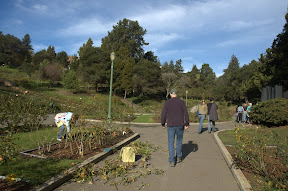 We crossed over Grand Avenue and up some stairs then down Jean Street to the Morcom Rose Garden. It’s named for Fred Morcom, the mayor of Oakland in the early 1930s who led the creation of the garden. The Friends of the Morcom Rose Garden, better known as the “Deadheaders”, were out in full force working on the roses. While it’s a city of Oakland park, volunteers do a lot of the maintenance. They’re out every second Saturday if you want to join them.

Then we walked through the park to Piedmont, where Paul pointed out the different street signs when we were in Piedmont. Never straying far from the Oakland border, we headed towards the Mountain View Cemetery. I told people about the tours there and the Oakland and California history there is to learn about. Docents at the cemetery lead general tours every 2nd Saturday and tours focused on different topics every 4th Saturday.

From there we were officially on our own for a while, to give people a chance to shop and wander at their own pace. I browsed a few shops, then stopped for a snack at La Farine bakery. 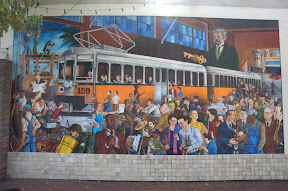 After that we met up at the Key Route Plaza. It’s named that because it used be a car barn for the Key Route. There’s a plaque and a lovely mural to commemorate the Key Route trains that used to run through there then up Piedmont Avenue. The mural is by artist Rocky Baird, who also painted the nearby mural on the side of Gaylord’s Coffee Shop. It features Key Route train #159, which last left the station at 6:45pm on April 19th, 1958. The mural is full of meanings, starting with the obvious figure of F.M. “Borax” Smith who created the Key Route to get people out to see and hopefully purchase his real estate. But the people pictured riding in car #159 were some of the donors, and there are other figures of note through the image as well. Read more at Oaktown Art and on SFGate.com.

We followed and crossed Glen Echo Creek towards downtown. Then it was up more stairs to Oak Park, more stairs and walkways past Harrison and Oakland Avenue, into Adams Point. Past some graffiti and a gnome or two, we crossed over I-580 and walked to the Grand Lake Theater. From there people headed to the Farmers Market, shopping on Grand Avenue or Lakeshore, or back towards home.

Another good walk, with lots of interesting bits and pieces to learn about Oakland and its history. Thanks to everyone who came out for it!

Links to some of the things I mentioned: