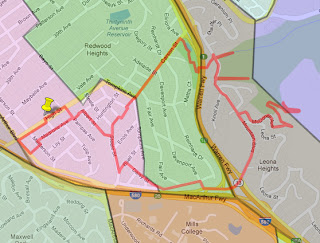 Last Saturday 50 people joined Oakland Urban Paths for a walk, Laurel to the Redwoods. The large turnout was due in part to people coming to hear our guide for the walk, Dennis Evanosky, a local historian and writer who is extremely knowledgeable about Oakland and East Bay history.

We started the walk at Saint Lawrence O’Toole Catholic Church in the Laurel. The church was originally closer to where I-580 is now, but before the freeway came through, the church moved up the hill to its current location. Then we walked a short distance to Scheberies Used Cars for the first of our urban paths. While Dennis told us about MacArthur Boulevard and the freeway, Gerry Scheberies came over to the edge of the lot. He’s been part of Oakland for a long time—since before the I-580 freeway was built. MacArthur Blvd. was part of a national plan for a road, intended to go from Mexico to Canada, but only the Oakland segment was built. See pictures and info from my visit 1.5 years ago. 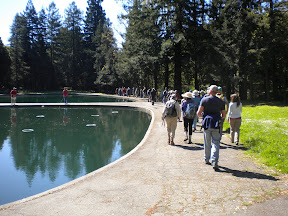 We took a number of urban paths and more traditional sidewalks through the Upper Laurel neighborhood into Redwood Heights, both of which are full of lovely homes. Then it was a big uphill on Carson Street to George E. McCrea Memorial Park, home to the Oakland Casting Club. That’s right, Oakland has casting ponds for people to practice their fly casting. The park also has trout ponds, but those are no longer used.

Then it was over highway 13 to Leona Heights, once site of the Laundry Farm Hotel. Named for the laundry operations that once filled the area, someone doubtless recognized that a name like Leona Heights Hotel would have more appeal, and the hotel was renamed. The original plan for the OUP hike was to go up the York Trail near Horseshoe Creek, but the heavy rains we got a while back had damaged the trail and bridges, so we just viewed the area from trailhead and heard about the redwoods. 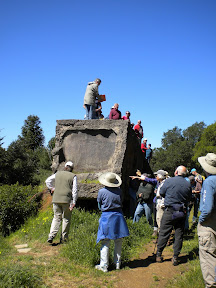 Nearby we saw part of a quarry operation. What’s left is an odd concrete tube, which rock was pushed down (later they used railed carts) and delivered to a crusher. That rock was used for railroads, including the Feather River Canyon.

Up another nearby canyon took us to an abandoned sulfur mine. The original miners were excited because they thought they’d found gold, but it turned out to be iron pyrite (fool’s gold). But they soon discovered that the sulfur deposits there could be profitably mined instead.

We went up the nearby fire trail a ways, where we could see the old Chabot Observatory below. That was actually the second Chabot Observatory; the original was on 11th and Jefferson in Old Oakland and dated back to 1883. They moved to the Mountain Boulevard location in 1915 because of light pollution, but access to that became limited in 1977 because of seismic safety concerns. The current facility, the Chabot Space and Science Center along Skyline, opened in 2000. Further up the trail we saw the approximate location where one of the first maps of the Bay Area was drawn. 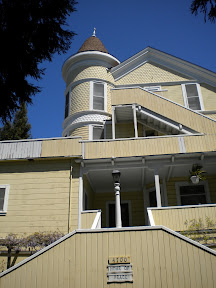 We walked back through the triangle between highway 13 and I-580, and saw Montgomery House, a home which was built by the Montgomery family for missionaries to stay in while they prepared to ship out on their mission trips. There’s a small chapel on the grounds which is still in use, and we were told the house across the street was one of the earliest orphanages in Oakland.

We worked our way back to our starting point, and I at least was definitely tired—as advertised, this was a strenuous walk. Thanks to Dennis Evanosky and Paul Rosenbloom for leading us on the walk, and thanks to all who joined us. The OUP walk coming up in May will definitely be less strenuous.

Lots more pictures from our walk:

See our route on Google Maps.

1 thought on “OUP Walk: Laurel to the Redwoods”