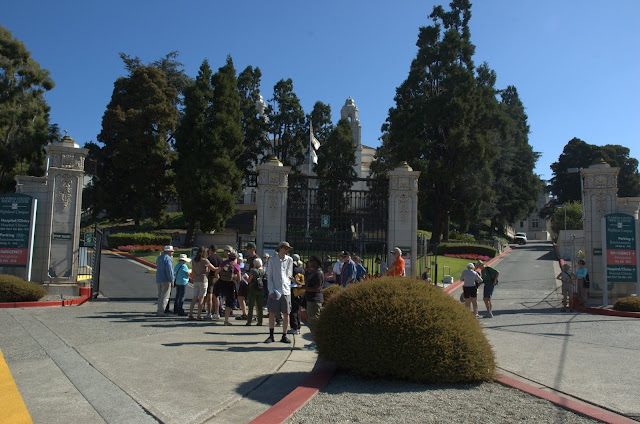 Saturday we had an amazing turnout for the Oakland Urban Paths walk focused on the stairs near Highland Hospital and the area around the EBMUD Central Reservoir. The day promised to be warm, but that didn’t stop almost 60 people from showing up to walk.

We started near the original front gate to Highland Hospital, where we admired one of the original 1920s buildings. It’s reminiscent of a Mexican cathedral, in the Spanish baroque style of architecture. It was designed by architect Henry Meyers, who also designed the Posey Tube, the Veterans Memorial Building and other well-known structures in Oakland. The grounds were designed by landscape architect Howard Gilkey, who designed the Cleveland Cascade near Lake Merritt, the Woodminster Cascade in Joaquin Miller Park, and other areas. The hospital came about because a citizens advisory commission developed a countywide plan for health care and facilities. 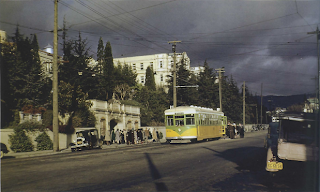 Then it was across 14th Avenue to explore various stairs that were built to connect residents of the nearby neighborhoods to the streetcars that ran on 14th Avenue. The stairs are unusual, in that some of the residences along them can only be accessed via the stairways. At top of one of the stairways, we admired the view and I told people about Dennis Evanosky’s palm tree method. The palm trees we saw across the way were the ones marking the edge of the “Borax” Smith estate near Park Boulevard. I also told people about Andrew Alden’s method of using sidewalk stamps for figuring out the age of a neighborhood. Neither Paul nor I knew the exact age of the stairways, but then I saw a stamp on one of them from 1922. Another of the stairways had been repaired fairly recently. Oakland Urban Paths cataloged all the stairways and pathways they could find in Oakland in 2009, and noted the condition and usage of each. The city then used that info for assigning priorities to which stairs got repairs. 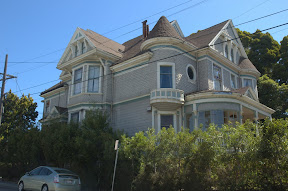 Paul then led us past numerous lovely Victorians and other homes, until we eventually came to the former home of John Cornelius McMullen which dates back to 1896. He was an attorney and banker who founded what became the State Savings Bank in Oakland. The brick building that was home to the bank still stands across from the Tribune Tower at 1305 Franklin Street; it’s called, appropriatley enough, the McMullen Building. John had served in the First Wisconsin Infantry during the Civil War and was with Sherman on his March to the Sea. He attained the rank of captain, but for some reason he was known as (and addressed as) “Colonel McMullen.” He died at his Queen Anne-style home at 2748 Grande Vista Avenue on December 30, 1912. He rests at Mountain View Cemetery. 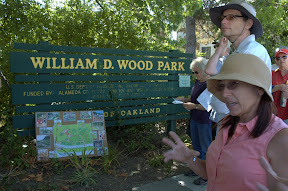 More walking gave us our first glimpse of the EBMUD Central Reservoir. It was built in 1910 by the People’s Water Company. It covers 14 acres, and can hold 154 million gallons of water. Unfortunately, it leaked in the 1950s, and the resulting slide moved an entire neighborhood. The sliding was stopped by the Corps of Engineers, but it destroyed dozens of houses, and left the area unsafe to build. It became William D. Wood Park in 1976, and a now a group of dedicated neighbors are working to clean it up and improve it. We heard about the history of the park and the volunteer efforts from Jill Weil who lives nearby. There was a more recent slide west of the original, which destroyed additional homes. It’s unclear whether the recent slide was the result of additional leaking, and a lawsuit was filed in 2007.

We walked through Wood Park, then over to I-580, otherwise known as the MacArthur Freeway. A bridge took us over the freeway to the Altenheim senior housing in the Dimond. A short walk along MacArthur Boulevard and another bridge back across the freeway brought us to the other side of the reservoir. We meandered through several streets, back down the first set of stairs we’d climbed, and returned to the front of Highland Hospital.

Another great walk. Thanks to Paul Rosenbloom for leading the tour, Jill Weil for telling us about Wood Park, Dennis Evanosky for information for the tour, and Annalee Allen for information about the tour and the mention in the newspaper. And thanks to everyone who showed up for the walk!