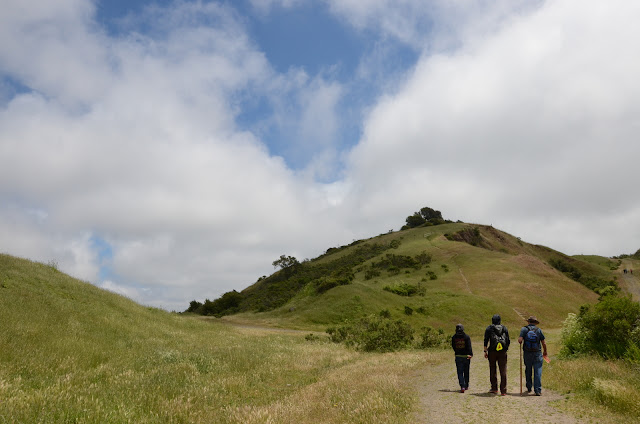 On Saturday, local historian and author Dennis Evanosky led Oakland Urban Paths on a hike through Sibley Regional Volcanic Preserve. It was quite a bit less urban than our regular walks; there were no stairs, no streets to cross, and instead of worrying about traffic, our biggest concerns were poison oak and cow pies.

Dennis told us some about the geology of the area. The peak, Round Top, is an ancient volcano. It sits between two faults, the Hayward Fault to the west, and the Calaveras Fault to the east. Over time, the volcano was tipped on its side. Much of this wouldn’t be visible, except Kaiser Sand and Gravel quarried in the area for basalt, and resulting digs exposed more of the underlying geology.

At the bottom of several former quarries, labyrinths have been constructed. Unlike mazes, which have any number of false routes and dead ends, a labyrinth has a single path from the outside to the center. The size is usually measured by the number of turns, i.e., how many times the path doubles back. Walking a labyrinth can be an act of meditation; I would guess constructing one could be, too.

Along with geology, there were lots of wildflowers to look at, and a variety of birds, including crows, a red-tailed hawk, and in the distance, a turkey.

Our final stop gave us a view of another ancient volcano, Vollmer Peak (formerly known as Bald Peak) in Berkeley, the Caldecott Tunnel, and the site of the eastern end of the former Kennedy Tunnel. A great hike—many thanks to Dennis for leading it, and to the 45 or so folks who came out to participate.

The next regular OUP walk will be Saturday, June 11th, but we haven’t decided which walk we’ll do. On Saturday, June 4th, there will be a special walk in the Golden Gate neighborhood as part of Love Our Neighborhood Day. Note the different start time.

More photos from the hike: 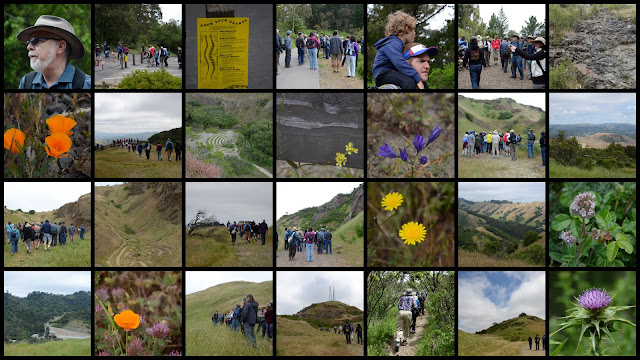