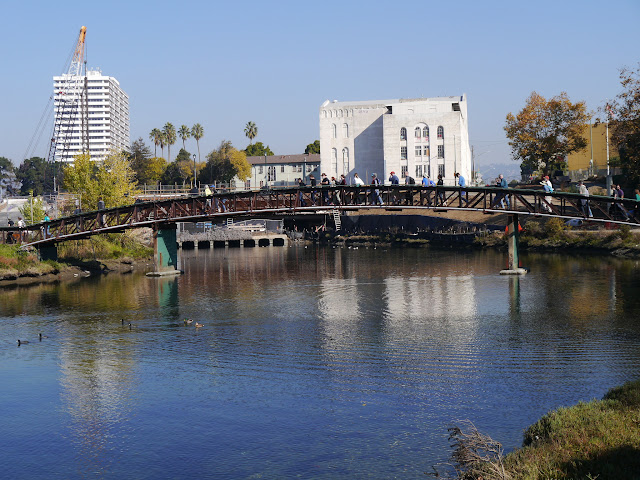 Nearly 100 people (plus a record 8 dogs) turned out for the Oakland Urban Paths walk exploring the changes along the estuary and the Lake Merritt channel. Led by city planner and WOBO member Ruth Miller, we started in front of the historic Heinold’s First and Last Chance Saloon.

We began by viewing some historical maps of Oakland that help show just how much we’ve changed the shoreline of Oakland over the years. The 1857 map in particular shows clearly that Lake Merritt isn’t a lake, but a tidal slough, and much of West Oakland is filled land. (You may also notice that much of Alameda is fill, and that it wasn’t originally an island.)

Ruth told us some about Measure DD, a 2002 bond measure that has paid for numerous improvements around Lake Merritt and the estuary. Part of that is to improve the flow of water in and out of Lake Merritt. While the channel won’t be as wide as it was in 1857, it is being widened and made more friendly to wildlife and people. We crossed over the channel on the bridge at Embarcadero. Like the other bridges across the channel, this one is slated for replacement, too. The new bridge will be wider and include bike lanes and proper sidewalks, and should provide better clearance for kayaks and other small boats.

Then we went in to the 5th Avenue Marina, a small community of artists in the middle of an otherwise industrial area. They’ll be getting some neighbors in the form of the $1.5 billion Brooklyn Basin project, but not all of them are very happy about it. All around them will be shiny new buildings, a mixture of residential and retail, some as tall as 22 stories. The neighborhood will still exist, but how will it be changed?

We then walked up the channel a ways and over one of the pedestrian bridges back to the other side in the midst of the Laney College campus. Ruth told us about more of the Measure DD work, first mayor of Oakland Horace Carpentier and his ‘bridge of sighs’, and the pottery studio at Laney. From there we followed the channel to 7th Street. We were going to go under the street, next to the 7th Street pumping station, but ironically the walkway was too flooded. The pumping station was built in 1971 because of flooding around Lake Merritt in the 1960s. Now they mostly let the water flow in and out with the tide, but if a big storm is forecast during a high tide, they can bring down the lake level to make room, and even pump against the tide if they need to. 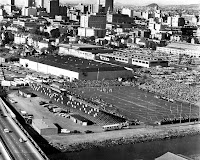 More meandering took us to Victory Court, near the Oakland Fire Department’s training center. I told people about what had been there before. It’s filled land, but before Laney College was there, it was Frank Youell Field, where the Oakland Raiders played from 1962 through 1965 while the Oakland Coliseum was built. (And did you know the Raiders were almost called the Oakland Señors? It was the winner of a naming contest, but fortunately didn’t go through.) And before the football field was the Auditorium Village Housing Project, “temporary” housing built for some of the many people who came to work in the Bay Area shipyards during WWII. That’s where Victory Court got its name. (The WWII housing project in West Oakland that someone asked about was the Harbor Homes Housing Project.)

A few people returned to Heinold’s for more talk and a post-walk beer (though Heinold’s didn’t open until close to 1PM, instead of 12-ish). Another great walk! Thanks to everyone who came out, and special thanks to Ruth Miller for guiding us on the walk. The location of next month’s walk is to be determined, but it will be the 2nd Saturday, December 12th at 10AM.

More pictures from the walk. Thanks to volunteer Charlie Lenk and walk participant Ethan Lavine for the use of some of their photos.