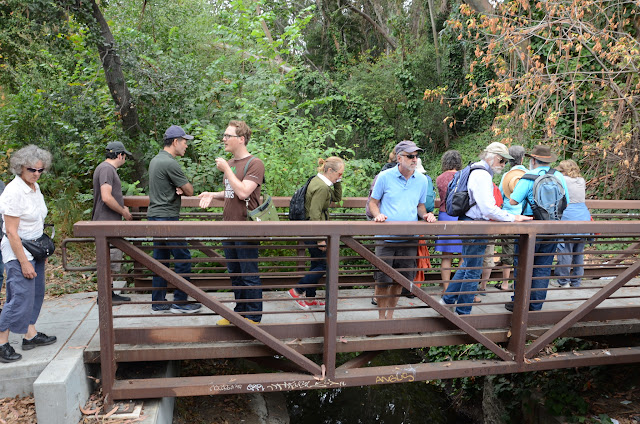 Saturday, 35 people (and one dog) joined Oakland Urban Paths for an exploration of the Glen Echo Creek watershed, led by Chris Kidd.

The local topography is something like a hand with the fingers spread, with ridge lines alternating with shallow valleys cut by streams like Glen Echo Creek. The creek starts as two branches, Cemetery Creek that comes through Mountain View Cemetery, and the Rockridge branch, which comes through the Claremont Country Club’s golf course and feeds into the Bilger quarry. Heading east from our start outside the Cat Town Cafe and Adoption Center, we descended slightly then began climbing the next ‘finger’ on the other side.

There are lots of beautiful houses and stairways along the way. One interesting stop was at Oak Park. The site was formerly Edison Elementary School which one person on the walk had attended as a child. The school was closed in 1971 because it wasn’t up to earthquake standards. It was subsequently sold and converted into condominiums. While the playground became a city park, the city doesn’t maintain it, the neighbors do.

Like many creeks in the East Bay, much of Glen Echo Creek runs in underground culverts. Glen Echo does have more open segments than many creeks, but it almost disappeared completely. Back in the 1950s, there was a plan to build the Richmond Blvd. Freeway which would have run from near Snow Park downtown, over Glen Echo Creek and through Piedmont, and to highway 13. Fortunately it wasn’t built…the freeways that were built were hard enough on Oakland as it is.

We meandered through part of Piedmont and to the Morcom Rose Garden. It was created in originally called the Oakland Municipal Rose Garden and the first rose was planted by then-mayor Fred Morcom in 1933. We took a brief break there while people checked out the roses, watched the labors of the Dedicated Deadheaders who take care of the roses, and looked at the names on the Oakland Mother of the Year walk of fame.

A different route took us back to our starting point, a bit tired but a lot more knowledgeable. Thanks to everyone who came out for the walk, and thanks to Chris for leading it!

Next month’s walk is still being worked out, but check www.oaklandurbanpaths.org for details. As usual, it will be the 2nd Saturday, starting at 10AM. See you on the paths!