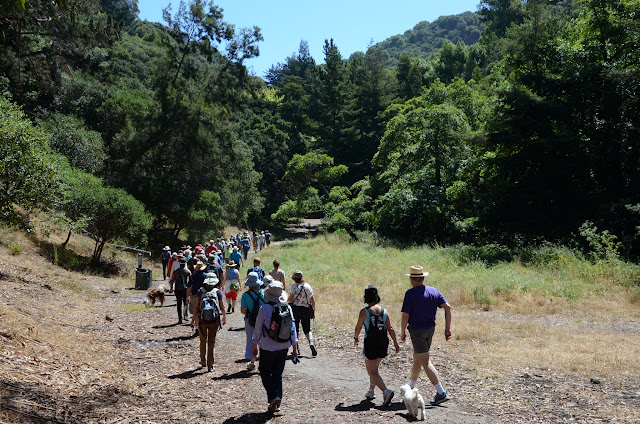 This past weekend was the monthly Oakland Urban Paths walk. Saturday a group of about 60 people (and 6 dogs) joined us for a strenuous, somewhat less urban hike from Laurel up into the redwoods of Leona Heights Park. The walk was led by local historian Dennis Evanosky.

As we wound our way along streets and pathways, Dennis told us about some of the local history including the granting of Rancho San Antonio to Luis Maria Peralta by the Spanish government. Peralta never lived on the nearly 45,000 acre land grant, but his four sons did. Peralta was given everything from the water’s edge to the crest of the hill, except for the port and the redwoods which the government kept for themselves.

Our route took us through George E. McCrea Memorial Park, which is home to some fly-casting pools. The park was originally nearby next to the McCrea family home on what is now part of Holy Names University. A pedestrian bridge took us across Highway 13, and it was into Leona Heights Park. The trail follows the stream, and starts off fairly wide and easy to walk on. At one point, the WPA crews didn’t go any further, and the trail becomes narrower, steeper and unsurprisingly, less well maintained. But most people (and dogs) stuck with us. We stopped at one point to look at an albino redwood tree, and Dennis told us about the cutting of the redwoods and how they were transported to the sawmills.

More climbing took us up to a fire road, and from there we could see out across the bay. We also saw the Old Survivor Redwood Tree, one of the few trees in the area to not be cut 150 years ago. A core sample was taken years ago by city naturalist Paul Covel, and it’s estimated the tree is about 450 years old. We followed the fire trail down the hill, past the old sulfur mine, and got views of the previous location of the Chabot Observatory. The newer Chabot Space and Science Center near Redwood Regional Park opened in 2000, but the first location of the observatory was downtown, in what is now Jefferson Square Park.

The return to our starting point took us past the Home of Peace, which was started by the Montgomery family in 1893 as a waystation for missionaries. Special thanks to Dennis for leading the hike, and thanks to everyone who came out for it! Be sure to look for Dennis’ various local history books next time you’re at Laurel Bookstore downtown at 14th and Broadway.

Lots more pictures from the hike:

An approximate map of our route on Google Maps.

3 thoughts on “OUP walk: Laurel to the Redwoods”