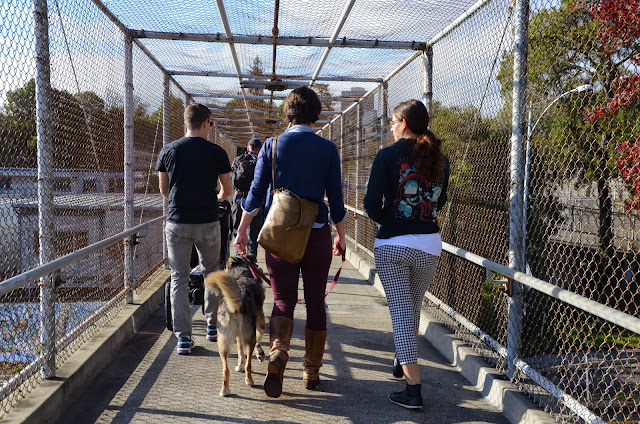 Saturday was our monthly Oakland Urban Paths walk, this time going from Lakeshore to Piedmont Avenue and back again. It’s a walk we’ve done before, but there were a few changes. About 35 people and 5 dogs joined us some perfect weather to explore Oakland.

From our start in Mandana Plaza, we climbed over the hill behind the Grand Lake Theatre, and around past the former Lakeview Elementary School. From the unusual pedestrian bridge over I-580, it’s easy to see what an impact the freeway (completed in 1966) had on the school (built in 1913). The school is now closed, and OUSD uses the space for offices. Over the bridge took us into Adams Point, named for Edson Adams, one of the ‘founding scoundrels’ of Oakland. For those that were wondering, Jayne Avenue is named for his wife, Hannah Jayne, who was Oakland’s first school teacher.

Several sets of stairs took us through the Harrison-Oakland / Harri-Oak neighborhood, down to Glen Echo Creek. The creek is also known as Cemetery Creek where it begins up in Mountain View Cemetery. It winds its way (sometimes in a culvert) all the way down to Lake Merritt, where it feeds in near the Veterans’ Memorial Building. 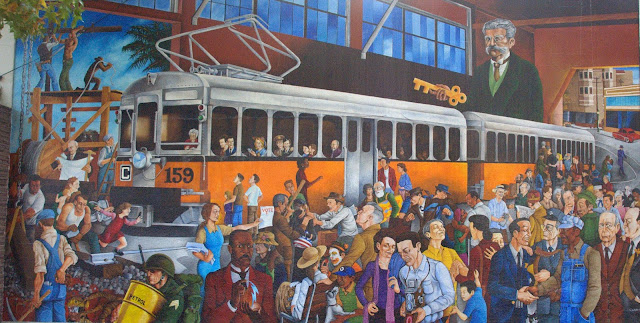 We walked over to Piedmont Avenue, and planned to meet up in Key Route Plaza after a short break. There we were disappointed to find that the wonderful Key Route Plaza mural by Rocky Rische-Baird had been destroyed. A new tennant, KronnerBurger, is moving into the space that used to be J’s Mexican American Diner. They said later on Twitter that the wall wasn’t properly supported (true, but fixable) and covered with black mold (possibly true, but also fixable). However, they made no effort to preserve the mural, and the artist and neighborhood residents are understandably upset.

We walked back towards our start along a different route, visiting some different sections of Glen Echo Creek. We eventually came to the Morcom Rose Garden, named for former mayor Fred Morcom. Up the hill on Jean Street took us to the top of some nice stairs, which led us down to Grand Avenue. From there, the Davidson Way steps took us back up the hill, then it was a short walk back to our starting point on Lakeshore.

Another great walk. Thanks to everyone who came out. The January walk is still being planned, but may be a walk around the former town of Brooklyn just east of Lake Merritt. Hope to see you then!