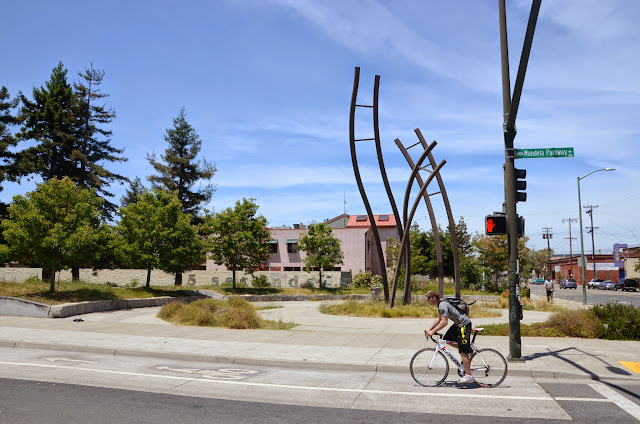 Saturday about 40 people and half a dozen dogs joined Oakland Urban Paths for a walk starting at the former 16th Street Train Station. Two common threads through the walk were “parks, places and people”, and earthquakes, railroads and freeways. Many forces have shaped Oakland over the years, but the latter are three of the big ones. It didn’t take long into our walk to see evidence of all them.

For many years, Oakland was the terminus of the first transcontinental railroad, and that opened up the way to more immigration from the rest of the U.S., and opened new markets for California products to be shipped elsewhere. The 16th Street station replaced the earlier train station on 7th Street in 1912. But the 16th Street station was badly damaged in the 1989 Loma Prieta Earthquake, and Amtrak service moved to Jack London Sqaure and Emeryville in 1994. The 1906 earthquake brought more than 100,000 refugees from San Francisco, many who stayed in Oakland even after San Francisco rebuilt. 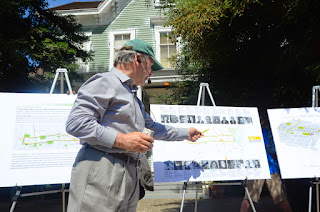 After crossing Mandela Parkway, where the Cypress Structure stood until the 1989 earthquake, we stopped at de Fremery House to hear from architects Philip Banta and Norman Hooks. They’ve envisioned a West Oakland Walk (W.O.W.) as as a network of “Parks, Places and People”. It’s an urban design concept to leverage central city assets into a “green social circuit” for walking, biking, organic gardening, exercising and meeting friends, activities that build sustainable communities. We followed about 3.5 miles of their 4.5 mile loop.

A short walk took us past numerous beautiful homes, including the historic Hume-Willcutt House, where Joseph Willcutt, director and secretary of the Southern Pacific Railroad lived. Keeping with the earthquake part of the thread, the house lost an ornate brick chimney in the 1989 earthquake. Then it was to the I-980 freeway. It divides West Oakland from downtown, even though they are a short distance from each other. Historically there was much more interaction between the two because they’re adjacent, but now a large, physical and psychological barrier limits the interaction to a few noisy overpasses.

Looping through Frank Ogawa Plaza downtown, we saw what appeared to be a small press conference. I ran into some of the participants later, and it turns out they were shooting a small scene from an independent movie about the Occupy movement. After stops at the African American Museum and Library of Oakland and the First Unitarian Church (badly damaged in both the 1906 and 1989 earthquakes), we crossed back over the freeway.

On our way along 14th Street, we stopped at the Cypress Freeway Memorial Park, which remembers the victims of and first responders to the freeway collapse during the Loma Prieta quake. After the remains of the double-decker freeway were removed, the neighborhood fought to have the new freeway routed elsewhere. Now the parkway is a lovely open space, and the adjacent neighborhoods were rejoined.

A great walk. Thanks to everyone and everywoof who came out for it, and special thanks to Phil Banta and Norman Hooks for sharing information about the West Oakland Walk, and some of Oakland’s parks, places and people. Next month’s walk will be Saturday, July 12, in the Golden Gate district in north Oakland.

To learn more about some of the parks, places and people we talked about, see this list of pages on the Oakland Wiki.

If you enjoyed the walk and want to learn more, or if you missed the walk, the Oakland Heritage Alliance will be covering some of the same route in August. They won’t be doing the full 4.5 mile loop either, but will start at Lake Merritt and end at the 16th Street Station. Besides Oakland Urban Paths and the Oakland Heritage Alliance, the city of Oakland also does downtown walking tours. See a more complete list of Oakland walking tours on the OaklandWiki.

After the walk, if you noticed a couple of people working the soil in front of the train station, they were doing prep work for the WOW Farm. It’s part of an youth entrepreneur program with the Game Theory Academy, whose mission is “to improve the economic decision-making skills and provide opportunities to low-income youth who have experience with juvenile justice, foster care and homelessness.” They’ll be using some of the space in front of the train station to grow cut flowers.

Here is a map of our (approximate) route (we cut down San Pablo instead of Telegraph.)