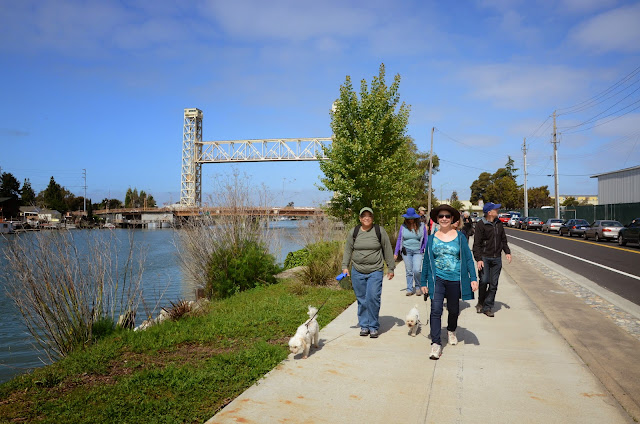 On a foggy Saturday morning, 40 people (plus a record 7 dogs) turned out to explore Jingletown and the Estuary with Oakland Urban Paths. While we gathered at the former Cryer & Sons Boatyard at Union Point Park, we watched some whaleboat races in the channel near Coast Guard Island.

By the time we got underway, the sun was starting to break through the fog and it warmed up quickly. A short walk took us to the controversial Sigame sculpture, which features pieces of different notable women from Oakland’s history. Chris Kidd also told us about the clever approach used to clean up the land for Union Point Park, encapsulating the soil into the spiral mound at the center instead of trucking it off for remediation. At the south end of the park, the Bay Trail leaves the waterfront because the ConAgra Mill still uses its waterfront access (in addition to railroad trains, which we saw evidence of later). That was a recurring theme of outbound walk—while access is getting better, there are still lots of gaps in the Bay Trail.

Along the way, we saw a new mural being painted by Ernest Doty and some other Oakland artists, the Fruitvale and High Street bridges opened to allow a sailboat through, the outflow of Sausal Creek into the estuary, and more. We went as far as High Street; to go further would mean another departure from the waterfront and a walk along a heavily industrial road.

Our return trip wandered through Jingletown to check out the various public works of art: murals, mosaics and sculptures. There are artworks around every corner, and even a few painted on the street. It’s definitely worth visiting Jingletown when there are open studios or other events to see more. Thanks to everyone and everywoof who came out for the walk!

More pictures of the walk from Alan Forkosh can be seen on Alan’s website.