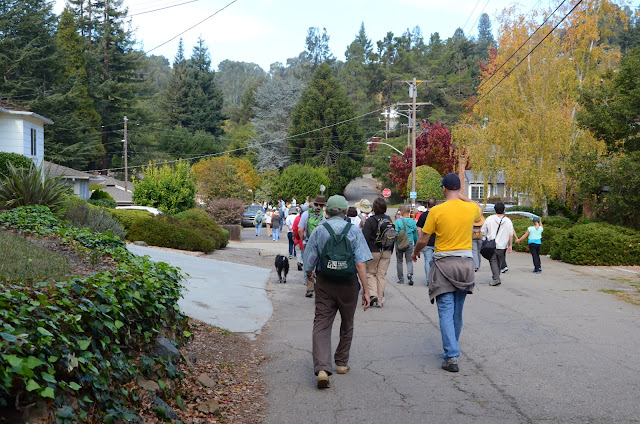 Saturday we had a record turnout for an Oakland Urban Paths walk, led by local historian Dennis Evanosky. About 125 people showed up to explore the traces of the Hayward Fault. We were joined by Andrew Alden, who has led geology-based OUP walks before, including an exploration of another part of the Hayward Fault last year.

We started the walk at the Redwood Heights Recreation Center, then headed down to 39th Avenue. One of the few residents in the area in 1868 lived nearby, but the great earthquake of 1868 was felt all over the East Bay and beyond. It was estimated to have been between 6.8 and 7.0 magnitude, and the shaking last 42 seconds. The worst damage was in Hayward, and there were 30 deaths including four in San Francisco.

Along 39th is an EBMUD reservoir, which was originally a “sag pond” formed by a depression along the fault. From there we headed north across 35th Avenue where Dennis told us more about local history. Many of the streets in the area are named for veterans of WWI.

Then it was up to Rettig Avenue along Peralta Creek. Part of Rettig is closed to automobile traffic because the effects of a landslide. A neighbor from the area told us about the slide and subsequent efforts to stabilize the hillside. A little further down the creek we heard from another neighbor about the efforts to clean up the area around the creek and make it into a park.

Up the hill, we came to the Kitchener Court landslide. After heavy rains in 1970, the entire area slid. First it damaged 14 houses, and eventually expanded to 22 houses. An even bigger concern was a fuel line carrying jet fuel from refineries to the Oakland Airport. A similar accident in 1969(?) in Canyon, CA, (just east of Oakland) raised serious concerns about a repeat on a larger scale in Oakland.

Then it was up hill past the Mormon Temple. We’d been there before on the Oakmore Highlands walk back in March, but approached from the other direction.

After a long downhill (and losing a few people to an estate sale in an interesting house), we returned to our starting point. Thanks to Dennis for leading the walk, and to everyone and everywoof who came out for it. And thank you for your patience as we worked out the bumps with the new sound system. Your donations are what made that possible, and help us with the mission of educating people about the urban paths, stairways and walkways around Oakland.

On a related note, did you know that Oakland was ranked the 9th most walkable large city in the U.S.? The hills definitely bring down Oakland’s score, but our beloved city is still a pretty darn walkable place. Oakland Urban Paths and Walk Oakland Bike Oakland are working to make it even more walkable and more livable. Thank you for your support in helping make that happen!