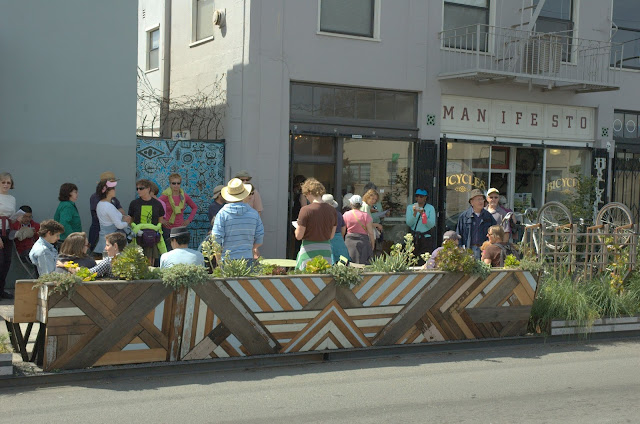 Saturday was the monthly Oakland Urban Paths walk, this time focused on Oakland’s parklets. A ‘parklet’ is taking over one or two parking spaces and making them available to people, by extending the sidewalk into a seating area. The walk was led by Chris Kidd of OUP and Ruth Miller, an urban planner who was instrumental in getting parklets introduced to Oakland when she worked with Walk Oakland Bike Oakland. We were joined by 40+ people and half a dozen dogs.

The first known parklet of was an art project by Rebar Art and Design Studio in San Francisco in 2005. They rolled out sod, set down a potted tree, and to keep things legit, fed the parking meter as needed. That’s how a number of cities have gotten into it, with parklets as temporary structures. Read about Park(ing) Day 2011 in Oakland.

The first official and more or less permanent parklet was in 2010 in San Francisco. Oakland got into the swing of things, and now has two parklets, with more in the works. We started our walk at the first permanent parklet, outside Farley’s East. Chris and Ruth told us a bit about parklets, and then we headed uptown.

At 28th and Broadway, we headed over towards Glen Echo Creek. These days it’s largely underground, but given the topography it’s pretty easy to figure out about where it is. We climbed stairs on the other side of the creek, past the historic First Christian Church, to Oak Park. While it’s an official city of Oakland park, it doesn’t feel a whole lot bigger than a parklet. It’s part of what was a school that was converted into condominiums. 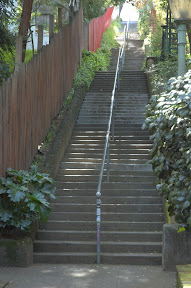 Back down the hill, across Glen Echo Creek, under I-580 and around some corners, and we crossed Glen Echo Creek again. We headed up to Piedmont Avenue, and then beyond to Howe Street and 40th. There’s an odd set of streets, with 40th Street running into 40th Street Way, and 40th Street itself continuing half a block to the southwest. The odd bit of street layout is because 40th Street used to be a cut through the hill that the Key System followed. The tracks then curved around to the northeast, and into what is now the Key Route Plaza that we saw on our December Walk and Shop.

Then it was down 40th to Manifesto Bicycles and the site of the second permanent parklet. We heard more about parklets, what’s involved in creating them, and what’s planned for the future. Several more parklets are in the permit and build process, including one on Lakeshore and one outside Actual Cafe at Alcatraz and San Pablo, as well as one on 25th Street between Telegraph and Broadway. From there people could either walk to Broadway to catch a bus, walk straight down Broadway for a quicker walk back, or stick with us for a few more meanderings. We went through Mosswood Park, back across Broadway, and across Glen Echo Creek one more time.

Another great walk. Thanks to Chris and Ruth for leading it, and to everyone and everywoof who turned out for it! Check the Oakland Urban Paths website for details on the next OUP walk, which will Saturday, May 11th at 10am. Hope to see you then!