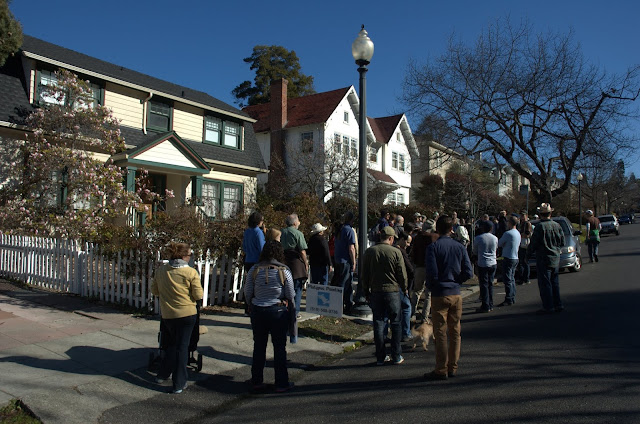 We had another great turnout for Saturday’s Oakland Urban Paths walk from Lakeshore to Park Boulevard. The number of participants has been growing steadily over the last couple of years. When Paul led this walk in January, 2012 we had 18 people and 3 dogs; Saturday we had 50+ people and at least 4 dogs. (Though to be fair, the weather wasn’t as good that day as the gorgeous weather we had Saturday.) 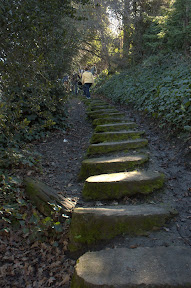 We started on Trestle Glen near Lakeshore Ave. near one of the ornate gateposts that date back to the early 1900s when the area was first developed. The streets were laid out by the Olmstead brothers, and some of the houses designed by noted architects Julia Morgan and Maybeck & White. You may recall that Mt. View Cemetery was designed by Frederick Law Olmstead, the father of the Olmstead brothers. Read more about the history of the Lakeshore area on the Lakeshore Homeowners Association (LHA) website.

Then we headed up Mandana Blvd. and up our first set up stairs into Oak Grove Park. It’s a privately-owned park between lots on Mandana and Longridge. Heading back across Mandana, it was time for stairs, stairs, stairs! Some of these stairs I worked on last fall with a group Oakland Pathways Volunteers to clean them up. This is exactly the sort of neighborhood effort Oakland Urban Paths would like to see all around Oakland. While the cleanup efforts have made the steps a lot easier to navigate, there’s still a lot of work to be done on some of them to repair the steps themselves.

The neighborhood is known as Trestle Glen, for the rail trestle that once crossed the canyon to Sather Park. That was built in 1893 by F.M. “Borax” Smith, the real estate magnate of the Realty Syndicate who eventually developed the Key System. Before that it was known as Indian Gulch, named by early Anglo settlers for the seasonal Ohlone village there.

We then walked into Crocker Highlands, once part of the William H. Crocker (son of Charles Crocker of the “Big Four”) estate. The area is full of beautiful homes, many also dating back to the original development. That was started in 1911 by Wickham Havens, son of Frank Havens of the Realty Syndicate.

Going up and down lots more stairs and some hilly streets, we eventually reached Park Boulevard, and stopped for a coffee break and for people to catch their breath after all the climbing to get there. We returned to our starting point by a different set of stairs and streets, and many people headed off in search of lunch on Lakeshore or nearby Grand Avenue.

Another great walk! Thanks to everyone and everywoof who came out to join us. The location for the OUP walk in March hasn’t been set yet, but it will be on Saturday, March 9th (the 2nd Saturday, as usual).