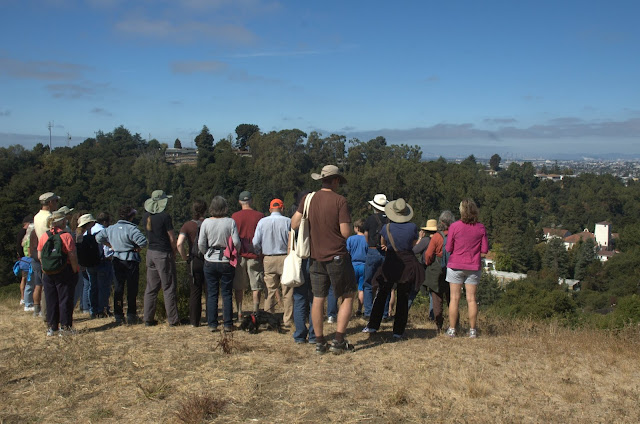 Saturday was another Oakland Urban Paths walk focused on geology. Led by geology writer Andrew Alden, we explored part of the Hayward Fault in Eastmont Hills and the King Estates Open Space.

Thirty people and two dogs joined us for the short but vigorous walk which featured no stairs, only one improved walkway and lots of dirt paths. After climbing to the ridge, we walked into the nearby King Estates Open Space. The open space straddles the ridge, with views across I-580 to the hills and sweeping views out over the bay. 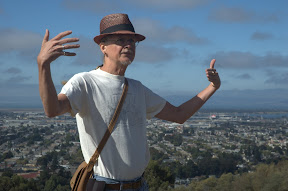 Andrew pointed out the approximate path of the fault, and noted features that indicate its presence. For example, the smaller ridges towards the west appear somewhat truncated. That’s because the land to the west is moving northward relative to the main ridge. The Hayward fault is a strike-slip fault, which means most of the movement is horizontal. The movement over time is relatively small, so there aren’t dramatic effects like those that can be seen in Parkfield, California. But if you know what to look for, you can see possible evidence of the ground moving.

Andrew adds: aseismic creep on the Hayward fault takes place at various rates between zero and 8-10 millimeters per year. Aseismic creep is measurable surface displacement along a fault in the absence of notable earthquakes, i.e., movement not from an earthquake. Less than 10 millimeters per year is a very small amount, but over a couple of years it is enough to crack pavement, twist doorways, etc.

We walked down the hill and past Holy Redeemer College to some of the streets off of Golf Links Road. While the cracks in the sidewalks, driveways and streets might be just from the hill sliding, given the proximity to the fault it seems likely some of it is from the movement along the fault. I also wondered about the two now empty lots above Golf Links—simple landslide, or caused by the fault? Regardless, the fault does present a significant risk in the event of an earthquake. These days, anyone who buys a house near a known fault line in California has to sign a special form saying they acknowledge the risk. And everyone who lives in earthquake country should be prepared with an emergency kit and a plan. 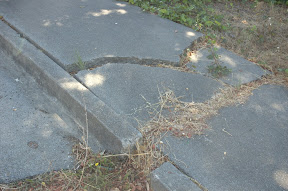 We walked along several streets and back up over the ridge to our starting point. Along the way I chatted with a number of neighbors who wondered what the group was. Everyone I talked with was pleased to have the group exploring their neighborhood, and I was happy to learn about a group of neighbors that had recently cleaned up the one paved walkway we encountered along with the rest of the neighborhood.

Another fun, informative walk. Many thanks to Andrew for leading the walk and sharing his knowledge of geography. And thanks to everyone who joined us!

Check out the USGS page on the Hayward Fault for some interesting maps. 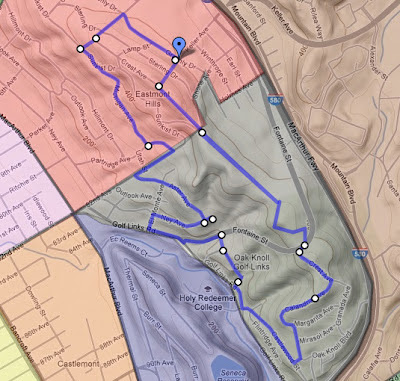